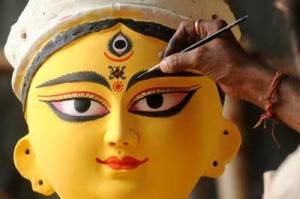 Isn’t it amazing that despite the society looking down upon and ostracizing the prostitutes, the deity of our Goddess is incomplete without the clay taken from the surroundings of her own dwellings.

Before it was stigmatized as mere fleshtrade many of the ‘bayijis’ were musicians and dancers or rather courtesans of repute. Though they were given their due respect, their lives were not respectable. Hence it was much later that music and dance stepped out of the ‘baiji’ area, and spread its wings into the more dignified and honorable neighborhoods, ensconcing themselves graciously into our daily lives.

Unfortunately today these ‘baiyijis’ have been stripped of the music part, and are left with only antipathy and odium that goes with harlotry. Yet the age-old custom didn’t cease to exist. No matter how much you disrespect and look down upon her, this one time in the entire year, and perhaps the most important time in the entire year, we have to beg at her doorsteps for a little bit of clay, elevating her status for that one tiny little moment.

So how did it start? The story goes that one day Parvati was observing the daily chores and routines of the earthlings. She was aghast to find that men were visiting other women out of wedlock and was besides herself to see the pain, trauma and stigma, these women faced in the society, yet the respectable and honorable men visiting her didn’t seem to be affected at all.

She ran back to Lord Shiva at Kailash and asked him why he chose to shut his eyes towards these poor women and that he must in some way redeem them.

Calming Parvati down, Lord Shiva blessed these women with the virtues that others brought to their doorsteps. Every time a man visited them, he would have to leave behind all the virtues he had accumulated over his lifetime and when returning back he would take back all the ominous deeds of the woman he was visiting.

Over time the other woman and her dwelling would be overflowing with virtues whereas the man’s quarters that he shared with his family, would eventually become unpropitious and inauspicious.

Therefore every time Parvati comes down to earth, her clay deity is incomplete without the virtuous clay from the prostitute quarters. It not only blesses the fallen woman but also infuses the ‘debi’ spirit into the clay Goddess.

12 thoughts on “Redemption in Indignity : From the Clay to the Goddess”