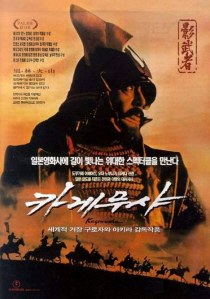 Can a fallen man fit into a noble man’s shoes? Can he measure up to his standards? Or does he remain fallen for the rest of his life? Does our birth, color, creed, nobility decide if we can achieve greatness? What does his Karma have in store for him? Well, no one knows what we are destined to do or become, we all try to keep afloat as best we can!

Kagemusha or “Shadow Warrior” is a Japanese movie by the well-known Director Akira Kurosawa. Kagemusha is an epic Samurai movie, be it the emotions or the colors or the technicality, it out performs any others in these aspects. It is a movie that questions the Samurai Code. 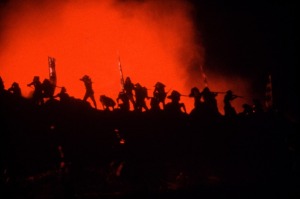 Basically it is about a man who has nothing and is thrown into a world, which he has neither created nor he knows anything about. A petty thief is taken in custody by the Takeda clan for his uncanny resemblance with their dying leader. Soon after Shingen’s, the leader, death Kagemusha takes his place and starts impersonating him. But its easier said than done, he has to be coached by the people near to Shingen, to pick up every trait of his. The film depicts the constant dilemma of the Kagemusha’s role and his psyche. At times the viewers are led into believing that he is possessed by Shingin’s spirit but we realize as the story moves forward that he is not possessed by any ghost but he is haunted by the Shingen’s own legacy. Though the detractors are fooled by the imposter, Shingen’s horse isn’t. When Kagemusha tries to ride it, he falls proving to the world he was nothing more than a lowly subterfuge. He is replaced and the new clan leader wages a war with the enemy clan and loses leaving behind only carnage and annihilation. Kagemusha, the low born, common thief imposter, who cannot have an iota of loyalty and bravery, is horror stricken to see the gore around him. He in his last act of valor and fortitude, charges with a lance into the enemy lines to avenge the myriad deaths, and eventually dies for the Shingen and Takeda Clan. 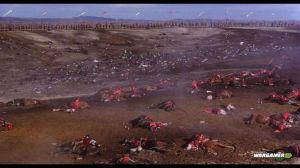 The plot is simple but the story telling is replete with pathos and  poignantly portrays that all men are equal. What remains is the dying Kagemusha floating in the ocean and the tidal waves carry him further than the rest of the fallen Takeda Clan. It is for the viewer to analyse if its just ideas that move forwards despite time or tide or is it that we are all here to fulfill our destinies that set us apart from the others.

I leave you with the trailer of Kagemusha

5 thoughts on “K for Kagemusha”