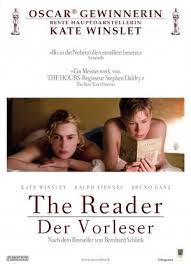 Why do we refuse to accept our intimate relations before the world? Are we hidding something dishonorable that gives us pleasure or are we keeping mute because the association is humiliating and guilt ridden.

The Reader addresses many such questions in the garb of a War movie. Directed by Stephen Daldry, it is based on the German novel by Bernhard Schlink called Der Vorleser, and stars Kate Winslet, Ralph Fiennes and David Kross.

The fifteen-year-old Michael meets the stunning Hanna, a tram conductor twice his age. They have sexual relationship and yes its absolutely wrong but the movie in not about that. It is about truth, lies and deception and how their lives change and are affected by it.

The two meet when the young Michael is sick and retching up, Hanna see him and brings him to her apartment, cleans him up and takes care of him. Thus begins the illicit affair. During his visits to Hanna, Michael discovers his own sexuality. Enamoured by Hanna he gets embroiled in a torrid sexual relationship. Hanna on the other hand makes no pretences of any emotion towards him. She is well aware of their age difference and calls him ‘kid’ too. Then why did she plunge into it? Did she only want sex? Or was it in exchange for Michael’s reading classics for her. If she had money she probably would have offered him for reading out to her but she only had herself to offer. 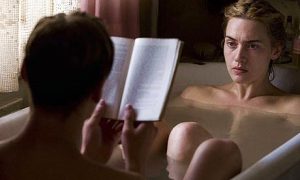 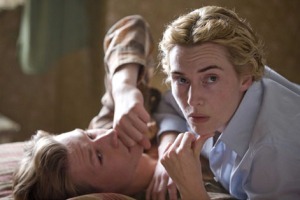 Anyway, Hanna suddenly disappears and Michael finds her apartment deserted. She didn’t even bother to leave a note behind for him, their relationship just stopped as abruptly as it started. It was quite a blow to the young and impressionable Michael; after all he did love her passionately.

Years later, when he is a law student, he encounters Hanna in the courtroom. She is under trial with other Nazi prison guards for war crimes. He is shocked beyond belief but as the trial progresses he finally understands why Hanna, wanted him to read to her, why she didn’t leave a note for him when she left and most importantly why she became a prison guard and is in all probability innocent. But even after uncovering her secret, Michael doesn’t stand up to speak on her behalf. He doesn’t want the world to know of their associations; firstly their affair was unlawful and a crime in itself secondly she was now a wanted war criminal. It was best to keep their secret where it was – deep into the closet.

Michael finds Hanna’s savings kept for the  war ravaged Jewish girl, now a woman. She is outraged at his audacity and refuses to take anything from her tormentor. Nevertheless he strives to undo the wrong done by Hanna and the Germans at large, and tells her to donate it to an organization that works for the rehabilitation of the Jews.

Many years back Michael chose to do wrong by getting involved in sexual relation as a teenager with a much older woman while Hanna chose to become a Nazi prison guard. Could this one act wash away or atleast alleviate their wrong doings? Perhaps yes, or perhaps in the eyes of the world the insurmountable wrong can never be undone.

The movies greatness lies not in narrating a war story of an uneducated woman and a young boy but in bringing out human truths about associations. Did Hanna have a choice of not afflicting pain on the Jews or where her German associations forced her to do her job as perfectly as possible and look the other way? Could Michael have saved Hanna at the court by giving away her secret and if he had how would the discerning world have regarded him? Well these are questions we still don’t have the answers to. 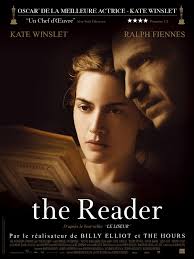 6 thoughts on “R for The Reader”