Wanted to write about a whacky and wild comedy that would rock your socks away. A movie that unleashes our inner child and brings out the rock star buried and waiting to come out at the slightest impetus. School of Rock is a comic movie that you can watch with your kid and have a hearty laugh together.

Directed by Richard Linklater, this quirky comedy stars Jack Black as the failed and ludicrous musician Dewey, thrown out of his unsuccessful and completely unknown band.

On the verge of being evicted Dewey in utter desperation impersonates as his friend for a substitute teacher’s position. Here he meets his fifth graders all of nine or ten years old. His students don’t really know what to make of the new teacher because he doesn’t teach them anything worthwhile. They are especially flummoxed when Dewey asks them to take an entire day of recess and bums a sandwich off his student. He finds that his students know more about, math, science and other subjects but Dewey is not bothered. He has his own agenda. He wants to teach the class how to Rock and feel great about it and in the end win the ‘Battle of the Bands’. 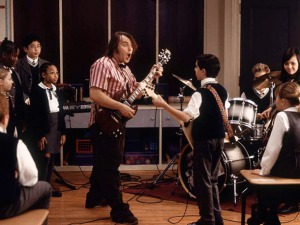 He listens to the lifeless performance of the class and decides to give them a complete makeover. Dewey assigns instruments to the talented students and selects Tomiko, the overweight girl in the class, as the lead singer. It is noteworthy that though this is an out and out comedy, School of Rock, makes an attempt to do away with stereotypes. Though Tomiko is shy in the beginning, Dewey encourages her by saying “You know who else has a weight issue? Me! But I get up there on the stage and start to sing, and people worship me!”  He gives a job to everyone in the class and it becomes their mission to work at it passionately and succeed.

Then there is the school principal Rosalie Mullins and though she is a prissy she is not an over the top caricature of a strict and evil principal. She is rumored to be capable of getting up on the table and do an imitation of Stevie Nicks after a few beers. 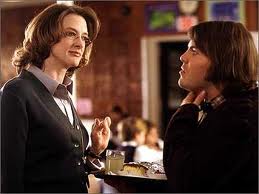 When the parents get to know about the ‘Battle of the Bands’ they are furious that behind their back the children were rehearsing for some silly music competition. The disgruntled parents take the first row during the competition and are quite surprised to see that their children are so talented. 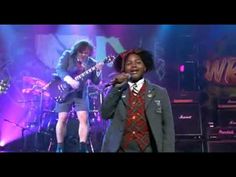 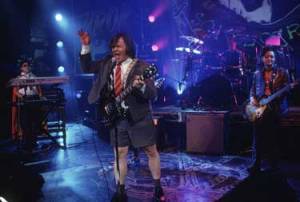 One of the underlying messages amidst all the goofiness and laughter, is do we really know what our children are interested in doing, what talents nature has bestowed upon them? We just thrust them in the throes of schoolwork and academics and propel them towards excelling, smothering their real talents.

Get the DVD of School of Rock and delight yourself and your child for the evening. I leave you with the trailer of the movie.

4 thoughts on “S for School of Rock”