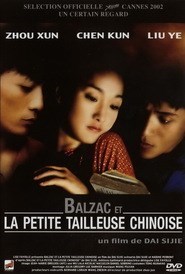 Movie titles with X are not easy to come by, at least not the ones that I would like to talk about and share. As I was browsing through my collection I chanced upon Xiao Cai Feng, a Chinese movie set during the cultural revolution of 1966-1976. The message that comes out strong and clear  is that no matter what impositions are placed in the name of ideology, religion or politics, human nature will most certainly find a way to get around it.

Today’s movie is called Xiao Cai Feng, which is almost an autobiographical account of the filmmaker-author Dai Sijie. The central characters are two teenage boys, Ma and Lou, scions of urban reactionary intellectuals, who are sentenced to the far reaches of the mountain village for reeducation. Here their books are burnt and they are sent toiling in mines and sometimes climbing thousands of steps along the mountainside with buckets of foul liquid oozing onto their backs.

“To think that this is the dump where we may spend the rest of our lives,” says Ma, when they first arrive at the village where no one has ever seen a book before neither have they ever seen a clock. But the two boys do take advantage of their intellect and knowledge and there are a few humorous incidents, especially when their camp enforcer tries to throw away the violin thinking it’s a toy, Ma plays a sonata and tells him that it was composed in honor of Chairman Mao – therefore the violin becomes an acceptable instrument.

In the absence of any education the camp heavy starts relying on the two for their smarts. In fact they are allowed to go to the nearby village to catch North Korean and Albanian dramas and report back the story of the same. Since there are no radios, newspapers or books the two boys become the source of entertainment and the eyes for the outside world for the entire camp.

Things change when they meet the grand daughter of an ancient tailor who is much revered in the next town. The two boys are enamored by this feisty beauty who is as illiterate as the rest of the town. To be around the young beauty the two take recourse to educating her. Soon they discover a stash of banned books written by foreign decadent writers such as Dumas, Balzac and Flaubert. In secret they begin reading to her exposing her to a world she never knew existed. She is influenced to such an extent by these books and her impressionable innocent mind is so moved, perhaps by Madam Bovary (me thinks), that she decides to leave the town on her own much to the dismay of the two boys. Their intention was to come close to her through the books but on the contrary the written words and stories were so overwhelming that she decided to explore life on her own leaving everyone behind.

In many ways Ma is modeled after Dai the author director who amidst hard labor did not lose his sense of humor. In one way the movie is explosive without going over the top, humorous without being absurd and romantic without being melodramatic. It’s all about life wrapped in a story about a country that the West imagines more than ever these days.