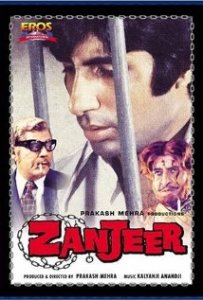 What better way to end the list if not by our own homegrown superstar Amitabh Bachchan. In fact Zanjeer (The Chains) propelled him to his super stardom and firmly placed him in a position from where he has been reigning as the supreme king of Bollywood ever since.

Before Zanjeer, Amitabh had a series of flops with which his career in the movie world took a nosedive. When director Prakash Mehra cast him, everyone in tinsel town warned that he was making a grave mistake but he took his chances and what followed was record-breaking history. In the era of romantic comedy, here was a movie with a disgruntled and intense hero, who has been dealt a losing hand by life. Bachchan became an overnight star after Zanjeer and with its success a new era ensued.

Vijay Khanna, witnesses the murder of his parents and this traumatic event scars him for life. He keeps to himself, has no friends and is a loner. Fast-forward twenty years, this little boy has joins the police and is an honest officer at that, while most of them are corrupt and tainted. Vijay soon befriends Sher Khan (Pran) and learns that all the underhand dealing by the underworld goes on under the king pin Teja, (Ajit).

After a few twists and turns and of course some song and dance numbers, Vijay is not only framed and imprisoned but also finds a lady love Mala (Jaya Bhaduri). Soon he finds out the truth behind his parents’ murder and that Teja the menacing villain was the perpetrator. Everything ends on a positive note as evil is finally vanquished and good reigns over evil.

Zanjeer was released during a time when common man was beleaguered with corruption, theft and injustice. This movie was like a catharsis to their pent up frustrations. Zanjeer led to a spate of such movies that shows the Hero fighting relentlessly for justice. Amitabh too became an icon for the ordinary man depicting their everyday struggles.

8 thoughts on “Z for Zanjeer”